Telehouse Europe, a global data center service provider, officially unveiled its £135 million data center North Two, at a prestigious launch event held within the new facility, on Wednesday, 30th November 2016. The event was attended by the Rt. Hon Greg Hands, MP, Minister of State for Trade and Investment, Mr Koji Tsuruoka, Ambassador of Japan to the United Kingdom and British television presenter and historian Dan Snow who was guest presenter for the evening.

The senior management team from Telehouse and its Japanese parent company KDDI celebrated the launch of its newest data center with customers representing a range of global businesses including internet service providers, cloud service providers, telecommunications operators, media and content providers, enterprises and financial service companies. Telehouse formally marked the occasion with a Kagami Biraki, a traditional Japanese Sake ceremony during which a wooden sake barrel is opened, in celebration of the event and the strengthening of partnerships. 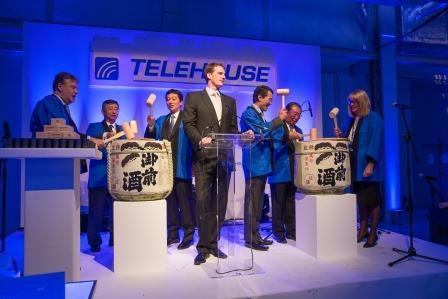 North Two is the latest addition to the Telehouse London Docklands data center campus where Telehouse pioneered purpose-built, carrier neutral data centers in Europe with the opening of Telehouse North. Telehouse Docklands is one of the most connected sites in the world, and this model is evolving to create “new eco-systems” among cloud service providers, content providers, mobile operators, and its users, consumers and enterprises.

The investment in North Two underscores Telehouse’s commitment to the UK. This data center, as part of the wider Docklands campus, positions Telehouse at the heart of the digital economy. It reaffirms London's pre-eminence as a world-class hub for communication.

Mr. Koji Tsuruoka commented “Prior to the North Two launch event I realised that behind all of the emails we send and receive and all the activities companies run, the infrastructure and service Telehouse provides here in Docklands supports every aspect of our life. I also learned that Telehouse supported many companies involved in providing digital content services during the London Olympic Games, which was watched by people all over the world. With this current unpredictable age and the anticipated potential impact of Brexit, it is really reassuring to know that KDDI-Japan has made such an investment in London.”

Mr Hands commented: “Telehouse’s decision to make the UK its European hub of operations is a testament to our strong and growing digital economy. As a pioneer in the data center sector, this new data center located within Telehouse’s historic Docklands campus will provide unrivalled connectivity, contributing to the UK’s long and strong history in innovation.”

Mr Hands continued: “It’s great to see this company’s continued investment in the UK and I’m pleased the Department for International Trade has been able to support them throughout this process. I hope that more international companies follow their lead and take advantage of the many strengths that make the UK a great place in which to invest.”